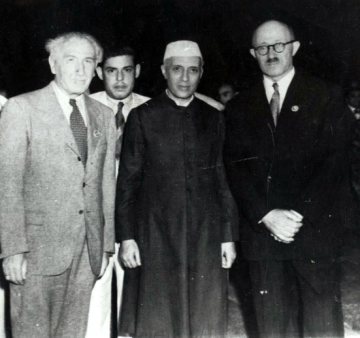 Did Jewish leaders and thinkers conceive Zionism as part of an “Eastern” – Asian and Semitic – cultural and national revival or as a Western importation and a colonial proxy? Why and when was it important for Jewish nationalist authors and activists to translate into Hebrew writings by Tagore and Nehru, and what were representatives of the Yishuv doing at the Asian Relations Conference in New Delhi in March 1947? What were the similarities between futile attempts of “dominionisation” in the British raj in India and Mandatory Palestine, and how is it connected to the parallels histories of partition and state-making in both places?
The aim of this talk is to explore these questions and sketch the outline for an alternative, trans-local and integrative history of interwar Jewish nationalism. In particular, the talk will highlight the changing and ambivalent attitudes towards India and Indian nationalism in Zionist thinking and will examine the intricate ways in which these has informed some of the basic cultural, religious and political tensions that characterized pre-statehood Jewish national thought. Ultimately, recovering this lost shared historical experience will help us better appreciate the degree to which Indian and Israeli politics today appear, not coincidentally, more similar to each other than ever before.

Arie M. Dubnov is a Senior Lecturer in History at the University of Haifa and, from January 2017, the inaugural Max Ticktin Chair of Israel Studies at George Washington University. Dubnov’s interests are in modern Jewish and European intellectual history, with emphasis on the history of political thought and a subsidiary interest in nationalism studies. His publications include Isaiah Berlin: The Journey of a Jewish Liberal (2012), essays inNations & Nationalism, Modern Intellectual History, History of European Ideas, The Journal of Israeli Historyand, as editor, Zionism – A View from the Outside (2010 [in Hebrew]). His current research project seeks to trace the genealogy of the idea of partition in the British interwar Imperial context, and to uncover other alternative, neglected federalist political schemes that were circulating at the time.

This seminar is organised with the support of the History Faculty.