The Gulf and the Horn: Changing Geographies of Security Interdependence and Competing Visions of Regional Order 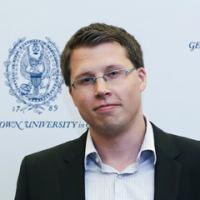 The historical proximity between the societies of the Arabian Peninsula and the Horn of Africa has in recent years been increasingly experienced as a relationship of growing insecurity. The leading Gulf States have rapidly expanded not just their economic and political roles on the other side of the Red Sea but have in the last three years also militarized their engagement, including the deployment of combat forces and the establishment of military bases on African soil in Djibouti, Eritrea, Somaliland, Somalia and Sudan.

Harry Verhoeven argues that the securitization of interactions between the Gulf and the Horn is not a transient phenomenon but the result of structural shifts that accompany a history of inter-regional connectivity to provide an explanation that goes beyond transactional geopolitical jockeying. For all the obvious differences in wealth and global influence, the Gulf and the Horn are markedly similar in other regards- and it is some of these similarities that are causing them to become increasingly enmeshed with each other in the security realm. Both the Gulf and the Horn are regional security complexes dominated by the politics of state survival and regime survival; they are regions of the world where the redrawing of borders is not just hypothetical but an empirical reality experienced in the recent past- see the creation of Eritrea, Somaliland and South Sudan as well as the de facto partitioning of Yemen (and, somewhat further afield, Libya).

In the midst of such politics of “state formation and decay” (Clapham 2017), the designs for regional order of the leading actors in the Gulf and the Horn are not solely contested by other aspiring hegemons within their respective subregions, but are clashing with those on the other side of the Red Sea. Saudi Arabia, Ethiopia, Iran and the United Arab Emirates are each offering a different vision of regional primacy, driven by insecurities about their domestic political settlement and therefore accompanied by processes of centralization and state-building internally. The tendency of elites to see the success of their regional ambitions as intimately linked to their ability to hold onto power domestically is crucial; because the stakes of these new geopolitics are perceived as existential, the wider region around these key states is increasingly securitized, leading to a redrawing of the imagined security perimeter that any regional order must consolidate. This is producing a pattern of regional polarization and security interdependence that is profoundly destabilizing, locally as well as internationally.

Prof. Harry Verhoeven works at the School of Foreign Service, Georgetown University in Qatar. He is the author of Water, Civilisation and Power in Sudan. The Political Economy of Military-Islamist State Building (Cambridge University Press, 2015) and Why Comrades Go To War. Liberation Politics and the Outbreak of Africa's Deadliest Conflict (Hurst/Oxford University Press, 2016) and the editor of the forthcoming Environmental Politics in the Middle East. Local Struggles, Global Connections (Hurst/Oxford University Press). He acquired his doctorate from the University of Oxford and was a Visiting Scholar at the University of Cambridge in 2016-2017. In the recent past, he has collaborated with the World Bank, UNDP and the UN Department of Political Affairs. He remains the Convenor of the Oxford University China-Africa Network (OUCAN) and is co-editor of the new Cambridge University Press book series on Intelligence and National Security in Africa and the Middle East.